Re-invent Your Business – Just Like The French Foreign Legion Did, Twice In Its History

Home » Blog » Dunvegan Blog » Re-invent Your Business – Just Like The French Foreign Legion Did, Twice In Its History 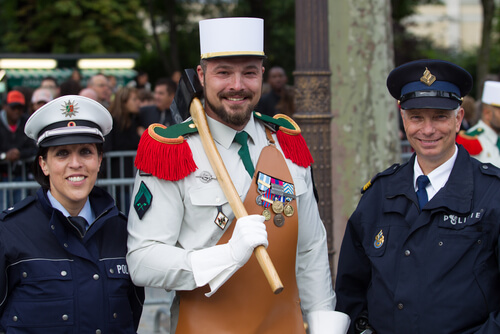 Re-invent Your Business – Just Like The French Foreign Legion Did, Twice In Its History

As the circumstances or the environment your business operates in change, you must think about repositioning or re-inventing your company so it remains relevant to your customers’ changing needs.

This is precisely what the French Foreign Legion (FFL) did after the First World War and again in the 1960’s after participating in an attempted coup-d’état against French President Charles de Gaulle.

But first some background . . .

Founded in 1831, the French Foreign Legion was created for foreign nationals who were willing to undertake military service on behalf of France.

Paradoxically, the Legionnaires’ loyalty has always been to the Legion and NOT to France.

The original purpose of the FFL was to militarily protect and expand the French colonial empire in the 19thcentury.

The popular and lingering view of the FFL is the one depicted in the 1939 movie ‘Beau Geste’ starring Gary Cooper where men in blue uniforms are marching through the desert in North Africa when not fighting the enemy.

Many of these men had apparently joined the Legion to escape the long arm of the law in their native country or because of various personal problems in their private lives.

During the First World War, the FFL fought on many fronts but by the end of the war there was serious consideration being given to disbanding the Legion because of the high casualty rate they suffered during the war . . . there were not many of them left.

For the Legion to survive, a way had to be found to encourage enlistment.

Colonel Paul-Frédéric Rollet came to their rescue. He understood that, instead of offering a sanctuary for runaway convicts, legionnaires needed a new myth of belonging and self-sacrifice.

Rollet was a military genius who understood the inner symbolism of such things as heroic defeats, odd uniforms and lost limbs. For example, Sir Adrian Carton de Wiart, one of Britain’s most decorated officers and Admiral Horatio Nelson were missing hands or arms.

Suggestively, Paul Rollet went into battle with just a rolled umbrella. He believed that a commander showed lack of faith in his men if he needed to be armed, and besides, it distracted from his real task of inspiring his soldiers to fight.

That Rollet seized on the heroic defeat of the Legion at Camarón fighting the Mexican Army in 1863, is no accident: men brought up to accept death and mutilation as the price for never being forgotten by their uber-family (the Legion) are stronger than those bribed with the comforting notions of victory and glory.

Rollet knew that an army doesn’t march on its feet, or even its stomach. It marches on the stories it tells itself. So he made sure that the Legion was full of traditions and stories and rituals.

He also turned a few marching songs into full-blown anthems. However tough, legionnaires must learn to sing with gusto the songs of former warriors.

Other armies don’t really do this, nor do the officers bring the men breakfast once a year (on Camarón Day, of course).

This action alone mimics a family in its concern. Every Legion memoir (and they are legion), however much it complains of bullying or incompetence, mentions with heartfelt gratitude the songs and traditions imbibed alongside the forced marches.

Fast forward to 1961 . . . when the FFL’s First Paratroop Regiment participated in the failed coup-d’état to overthrow French President Charles de Gaulle. The First Para’s were disbanded in the following months.

The coup attempt brought to the surface the troubled relationship between France and its Foreign Legion. The French admire it and yet don’t quite trust it.

Another re-invention was required.

This time, the solution was truly bold: to turn the Legion into an elite force, a strike force, the kind that could easily put down a coup, or stage one in another country.

The un-disgraced 2nd Parachute Regiment [who did not participate in the attempted coup in 1961] became the ‘Young Lions’ of this newly created force.

Given our rapidly evolving business climate, is it time to re-invent your company to better serve your customers’ needs?

Image courtesy of tpsdave at All-free-download.com