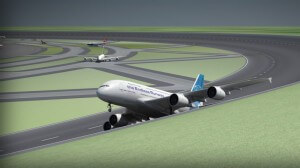 Process reversal can lead to innovation.

Reversal thinking essentially involves reframing a process by thinking about it ‘backwards’.

A good example is how we print documents . . . the paper moves through the stationary printer.

Alternatively, the printer could move across a stationary sheet of paper while it prints. This is exactly what ZUtA Labs did when they developed their first mini-robotic pocket printer which is about the size of a hockey puck and twice as thick.

An example of subtractive manufacturing is when a piece of steel has portions of it removed to create a blade for a gas turbine engine. This blade can also be created through an additive process where material is added layer-by-layer (i.e., 3-D printed).

A third example involves airport design and runway layout. When planes land, they do so on runways that have been laid out to take into account the usual direction of the winds to maximize the probability of an airplane landing into headwinds.

From time to time there are crosswinds, which if severe, can cause the airport to cease operations or require airplanes to make their approaches flying almost sideways or at an angle to the runway.

In a make-believe-world it would be ideal to make movable runways so that pilots can always make their landing approaches and take-offs directly into headwinds.

One way of accomplishing this would be to build a circular runway which is 2.2 miles in diameter. Work on this concept has been in progress for years.

Since 2012, Henk Hesselink and his team at the National Aerospace Laboratory in the Netherlands have been working on a runway design that’s circular instead of straight.

Their so-called Endless Runway Project—funded by the European Commission’s Seventh Framework Program, proposes a circular design that would enable planes to take off in the direction most advantageous for them. Namely, the direction without any crosswinds.

As Hesselink tells Co.Design, crosswinds are exactly what they sound like: winds that buffet an airplane from the side as it lands. He was inspired to create a new kind of runway while watching “scary” landing videos online, which show crosswinds in action.

When crosswinds are light, they have no impact on taking off or landing, but when they’re too strong, runways facing perpendicular to the crosswinds have to be shut down entirely—which can seriously impact not just one airport, but the entire network. It’s something that happens frequently near the ocean.

For instance, Hesselink says that the Amsterdam airport often has to switch between runways during durations of bad conditions, and in smaller cities with fewer runways, crosswinds can grind all flights to a complete halt.

But the circular runway system that Hesselink designed, with a diameter of about 2.2 miles and circumference of about 6.9 miles, can accommodate two planes landing simultaneously even when there are bad crosswinds.

That’s because there are always two areas on the ring where the crosswinds will be aligned with the direction of takeoff. In good conditions, three planes can land and take off simultaneously.

The circular runway works almost like a high-speed racetrack or roulette wheel, Hesselink says. If the circular runway were completely flat on the ground, the centrifugal forces would be too great and push the plane off the runway.

But his design is slightly banked, meaning it’s slightly raised on its outer edges to keep the plane on the runway as it gains speed.

For now, the Endless Runway remains a concept where the only testing has been within the safe confines of computer simulation. But Hesselink hopes to test the idea in real life on a racetrack with a drone.